STDs, especially chlamydia, gonorrhea, and syphilis, are on the rise in the U.S. The number of cases of such STDs, despite a brief reprieve in the 1990s, continued to climb in the 2000s. Wayne County, Michigan (where Detroit is the largest city) ranked 4th and 7th in the nation in 2012 for number gonorrhea and chlamydia cases respectively. Detroit was also dealing with high rates of HIV, with prevalence ranging from 0.02% to 1.88% depending on the neighborhood. Most alarmingly, the number of individuals with primary or secondary syphilis in Detroit increased from 73 in 2010 to 199 in 2013, a 173% change. In a case of unfortunate timing, Detroit in 2013 was on the verge of bankruptcy. Detroit city officials cut funding for the local health department and contracted the public health services it normally offered to a nonprofit called Institute for Population Health (IPH). Services, including STD prevention, continued to be performed at the Herman Kiefer Health Complex (HKHC) until October of 2013 when the building was forced to close its doors due to the inability to pay for maintenance. HKHC had been the hub of public health services in Detroit since 1928 and is still, to this day, unoccupied. Left with little choice, STD services were moved to a temporary location in the city. Center for Disease Control (CDC) experts cautioned that a move of vital STD services could result in fewer people seeking necessary services.

The closing of 526,000 square foot HKHC was not just about an end of a near-century-long run for the building. Specialized STD clinics also provide better care than general medicine clinics. Patients prefer STD clinics because of the availability of walk-in care, as well as “cost, confidentiality, and the convenience…of its expert STD care.” Patients often select STD clinics for their sexual health care even when they have access to other types of health care settings. 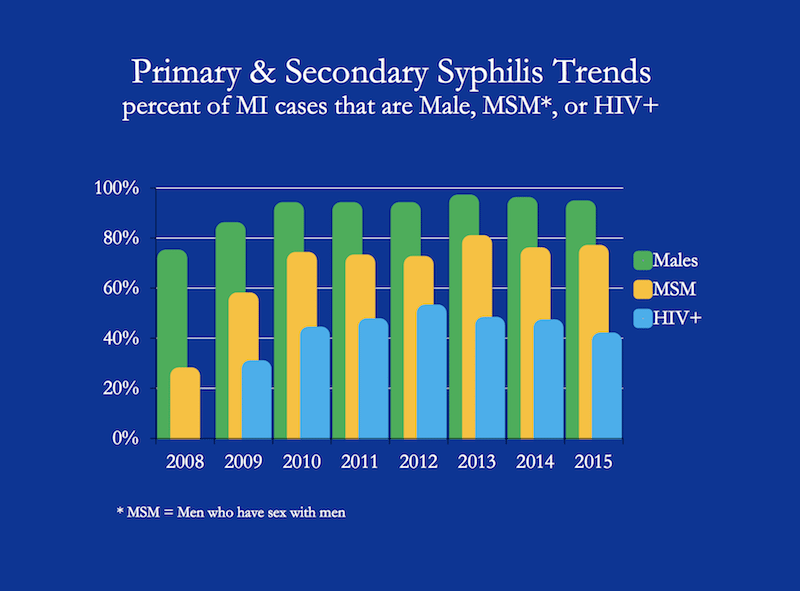 A major driver of the rising number of cases of syphilis was amongst young African American men who have sex with men (MSM). Historically, there are many barriers, including discrimination, and stigma that may prevent African American MSM from seeking STD testing. HKHC was the only dedicated STD clinic in Detroit, treating 11,000, mostly African American, patients a year. The complex was the “cornerstone of STD prevention and public health activities” in the city. Patients knew they could seek reliable and affordable STD care at HKHC. The CDC’s worries were warranted. In the midst of the alarming spread of syphilis, many Detroit natives didn’t know where the HKHC had gone.

The Michigan Department of Health and Human Services reached out to the CDC in January of 2014 to revamp Detroit’s STD clinical infrastructure in part due to the concern over this rapid spread of syphilis. The goal was to “re-establish STD safety net services in Detroit.” Finally, in May 2017, the Detroit Health Department in conjunction with Wayne State University School of Medicine and Wayne State University Physician Group moved into a dedicated STD Clinic at a new location in Midtown.

In consultation with the CDC as well as local public health officials, the STD clinical services had now been re-structured to a hub-and-spokes model. The hub of STD prevention in Detroit, replacing the HKHC, became the dedicated clinic based at Wayne State. The clinic began to see on average of 15 new STD patients a day. The spokes of the model were the other health providers that screened or treated STDs at the Federally Qualified Health Centers, emergency departments, and private practices that could refer to Wayne State for its expertise. A social media campaign, called Get Tested, was also launched to increase awareness and bring in new patients.

While it is still too early to determine the impact of this new STD program , it was a much-needed renaissance of Detroit’s STD prevention strategy and a welcome, if belated, expansion of public health services.