Yesterday I wrote that the United States spends far more on health than any other nation but trails many other countries in life expectancy. Today’s focus is on the fact that despite being the richest nation in the world, we are not the happiest.

How do you measure happiness? This question motivates social scientists such as Bent Geves who contend that the answer is not merely an academic exercise but an accurate indicator of social progress. “Paying more attention to happiness should be part of our efforts to achieve both human and sustainable development,” said the former head of the United Nations Development Programme, Helen Clark.

The first World Happiness Report, published in 2012, paints a sobering picture of the degree to which Americans are successfully achieving “the pursuit of happiness,” which along with “life and liberty” are among the inalienable rights enshrined in the Declaration of Independence. Influenced by the UN High Level Meeting on happiness and wellbeing, the report sets out to rank levels of happiness between countries using a metric that takes a wide range of factors into account, including GDP per capita, social support, and perceptions of governmental corruption. The 2017 report “emphasizes the importance of the social foundations of happiness,” recognizing a core public health tenet that systemic factors contribute to a person’s health.

The U.S. is the 14th happiest country among the Organisation for Economic Co-operation and Development (OECD). The relatively low ranking is partly explained by growing distrust in the federal government. The following graph, courtesy of Pew Research Center, highlights the low level of trust in the federal government, with the only spike occurring in the years after September 11th. 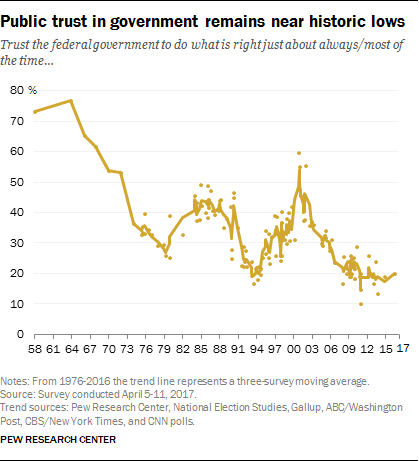 The relatively low ranking of happiness and growing distrust in government may in part explain what we are seeing worldwide with burgeoning populist movements and what we witnessed last November in the U.S. when the heavily-favored establishment candidate lost to the self-described anti-establishment candidate. In an election void of tradition and marred by slander and fake news, political revolt occurred at the polls by unhappy voters.

In the report, renowned economist and Professor of Sustainable Development and Public Health at Columbia University Jeffrey Sachs writes: “The United States can and should raise happiness by addressing America’s multifaceted social crisis—rising inequality, corruption, isolation, and distrust—rather than focusing exclusively or even mainly on economic growth.”